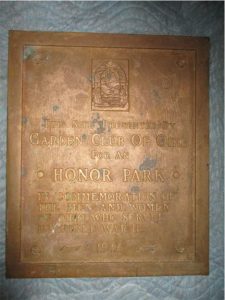 Honor Parks were the beginning of the Memorial Program in Ohio.  With the end of WWII in 1945, came the opportunity to recognize the men and women who had served during the war.   The project was to establish Honor Parks at strategic points throughout the state.  These small roadside parks, one to three acres of land, were gifted or purchased by Garden Club of Ohio (GCO) and turned over to the State Highway Department.  In 1946, eight Honor Parks were dedicated and a bronze marker was placed with the inscription, “HONOR PARK, IN COMMEMORATION OF THE MEN AND WOMEN OF OHIO WHO SERVED IN WORLD WAR II”.  These parks were located in Mansfield, Preble County, Milan, Woodville, Akron, Warren, Brighton, and Wayne County, Ohio.  Preble County and Brighton Honor Parks have been turned into rest areas on Interstate 70 and Woodville was the last to close in 1991.   The others succumbed to progress.

In the same year 1946, at the National Council of State Garden Clubs (NCSGC) Annual Meeting (now, National Garden Clubs), a project of a “ribbon of living memorial plantings traversing every state” called the Blue Star Memorial Highway Program was adopted. This program has developed into the Blue Star Memorial Highway system that covers thousands of miles across the Continental United States, Alaska, and Hawaii; currently running 10,000 miles.

In 1947, Mrs. Frederick R. Kellogg (NCSGC President 1930-1933) designated a marker, which would identify the highways.  The Marker was inscribed, “A tribute to the Nation’s Armed Forces who served in World War II”.   This inscription was cast in 1947-1950.  The blue star in the memorial marker was taken from the service flag that hung in homes and businesses to denote a service member fighting in the war.

In 1948, GCO adopted the Blue Star Memorial Highway Program and dedicated five markers.  The first Marker was located on Rt. 40, Belmont, and dedicated on October 18, 1949.  When Interstate 70 was finished in 1961, the Marker was moved to Belmont Rest Area.  Although the five Markers are not in their original locations, four of the markers can be seen in rest areas on Interstate 70 and one on Interstate 75; they have the inscription that was cast in 1947-1950.

The inscription was changed in 1951 to include all men and women who had served, were serving or would serve in the Armed Forces of the United States.  The inscription reads, “A tribute to the Armed Forces who have defended the United States of America”.  Ohio recognizes 225 miles of Interstate 70 (running east and west across the state) as their Blue Star Memorial Highway.  There are seven Highway Markers on I-70, two on I-71 and one on I-75.